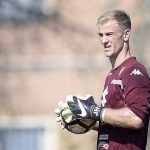 The Sun reported that they are willing to let Hart leave the club for a ‘considerate’ transfer fee – as a thank you for his years of service.

The England international goalkeeper has been frozen out at the Etihad by boss Pep Guardiola and allowed to leave to join Italian club Torino on loan for the season.

An Etihad insider said: “City would be willing to pay him off around half that figure and also be ‘considerate’ towards his selling price.

“They are also willing to bankroll half his present wages for 12 months and revisit the severance situation next summer.