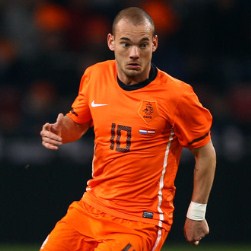 Manchester City is ready to rival Manchester United with a sensational move for Wesley Sneijder.

The Manchester Evening News has reported that Inter Milan are to propose a swap deal for want-away Blues star Carlos Tevez.

And United manager Sir Alex Ferguson last night distanced himself from a move for the Dutchman, saying ‘Forget it’, when asked about Sneijder on United’s tour of the USA.

City are losing patience with Arsenal over the proposed £20m purchase of Samir Nasri – also on Fergie’s wanted list – and Inter are keen to land Tevez, with Italian sources claiming they will sacrifice Sneijder in order to get him.

The Inter move comes hot on the heels of Corinthians’ move for Tevez in a state of bluff and confusion.