Reports are out claiming that Manchester City are listening to offers for Matija Nastasic. 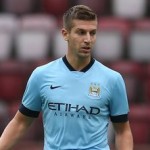 The Daily Star Sunday reported that City bosses will also consider offers of £15m for central defender Nastasic, 21, with Italian clubs Inter Milan and AS Roma both interested in the Serb who has failed to hold down a first-team slot.

City have promoted Dutch academy product Karim Rekik, 19, to the first-team squad. The centre-back, who also signed from Feyenoord in 2011, is classed as a home-grown player for squad rules purposes. Wilfried Bony Desperate To Get Over ‘Worst Spell’ Of Career