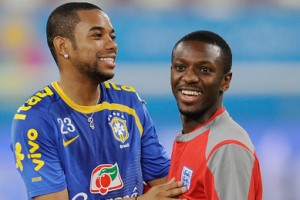 Manchester City want to end their new contract dispute with Shaun Wright-Phillips before the World Cup.

;ocal newspapers have reported that Manchester City have made moves to get back around the negotiating table with Wright-Phillips after talks broke down in March.

It is believed that the club do not want to allow the former Chelsea star to get into the final two years of his current £60,000-a-week deal. They are ready to offer an increased package to the England winger to fend off any potential interest.

Wright-Phillips was left aggrieved at not being offered a £100,000-a-week plus deal like team mates Emmanuel Adebayor, Kolo Toure and Carlos Tevez.

But despite his stepfather, former Arsenal striker Ian Wright, publicly condemning the club, City are now ready to compromise.