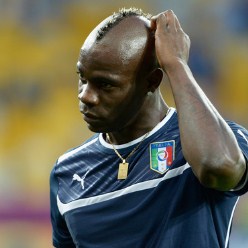 Manchester City boss Roberto Mancini revealed he has turned down a series of bids for Mario Balotelli this summer.

The Italian striker would clearly bring in money, such has been the interest in him this summer after his impressive performances at Euro 2012.

But Mancini has no interest in a sale.

“This summer, we had a lot of requests for him. Many important teams wanted him,” said Mancini.

“I said no because he is young and we are sure he can improve.”