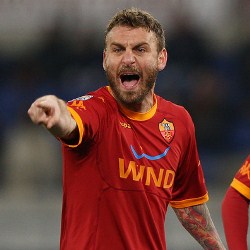 Sensational news are out and it has been revealed that Manchester City have made a mega contract offer to AS Roma star Daniele De Rossi.

With less than a year to run on his current deal, the Italian international midfielder faces a dilemma over whether to commit himself to Roma or seek a bigger payday elsewhere.

Il Tempo has reported that the cash-rich Premier League club have made contract offer worth €9 million (NET) a year. This more than doubles Roma’s offer of €4 million-a-year, including bonuses.

De Rossi has refused Roma’s latest offer and is now seriously considering a move to Etihad stadium for the new season.


Tottenham Wants Emmanuel Adebayor On Loan For Next Season