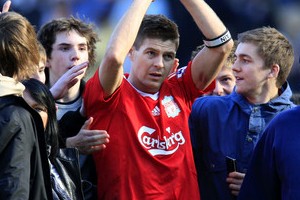 Sensational news are out and it has been reported that Manchester City are preparing a bid for Liverpool captain Steven Gerrard.

Local newspapers have reported that Steven Gerrard is ready to wave farewell to Liverpool – with Manchester City making a record £40million bid for the Kop skipper.

It is believed that cash-rich City’s Arab rulers have given the go-ahead for the capture of the summer and hope to agree a fee and speak to the England star as soon as possible.

City would not have Europe’s elite competition at City but he could take on a new challenge and lead them to a title bid.

City are poised to make their bid formal in the next few days but their interest is already known at the top level and the super-rich outfit want to get a ‘marquee’ signing that will make the game take notice.

The title wannabes know Real Madrid are also lurking but fancy their chances of outbidding them.