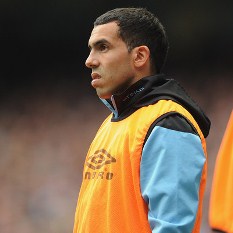 It has been revealed that Manchester City are willing to sell Carlos Tevez on the cheap in January.

The Daily Star says City are willing to take a bit hit on the Argentine to get him off their books, but could ask for a big sell-on fee.

Tevez could have cost Manchester City more than £15m with his bench bust-up in Munich.

Brazilian club Corinthians are planning a fresh bid for the striker after having a £34m offer turned down in the summer.

But director of football Edu – who wants talks with City in the next few days – insists they will not go that high again.