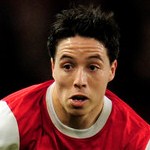 Reports have surfaced that Manchester City are ready to move in for Arsenal contract rebel Samir Nasri.

The Daily Star Sunday has reported that only City, Manchester United or Chelsea can match the French international’s wage demands.

And Nasri knows he is hot property after an impressive season which saw him included in the shortlist for the PFA Player of the Year.

The former Marseille star is determined to prove his star quality – but whether that will be with Arsenal remains to be seen.

Nasri, who turns 24 later this month, is currently on around £70,000 a week but feels he deserves more and is also said to be concerned by the Gunners’ lack of activity in the transfer market.