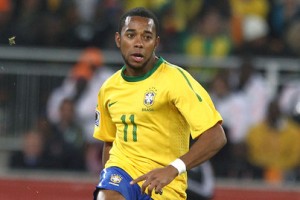 Robinho’s Manchester City future could become clearer today after his representatives have held talks with the club.

The Brazilian international winger, now age 26, was farmed out on loan to Santos in January.

However that deal will come to an end in August, meaning that the £32.5million flop is currently set for a return to City.

Eastlands boss Roberto Mancini has made it clear he will welcome back the former Real Madrid man.

But the ball lies in the Brazilian’s court and, if he wants a move, City will listen to offers of around £20m.

Robinho’s agent Evandro de Souza and father Gilvan de Souza are set to fly into Manchester for talks with the City hierarchy.