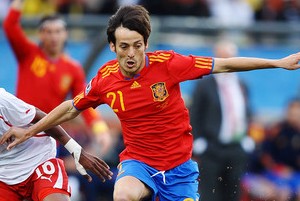 According to the Sun, Manchester City have been given permission to talk to Valencia’s £30million-rated winger Silva.

Javier Gomez, deputy chairman of the cash-strapped Spaniards, said: “We have permitted City to talk to the player but have not reached an agreement and have not talked about a fee.”

Chelsea are also in the frame for the Spanish international.