Reports are out claiming that Manchester City boss Manuel Pellegrini was maintaining a positive outlook following the injury to Kevin De Bruyne on Wednesday night. 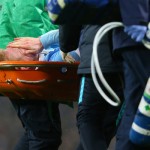 The Belgium international attacking midfielder was stretchered off late in City’s 3-1 Capital One Cup semi-final second leg win at the Etihad Stadium with his right leg heavily strapped.

It did not look good for City and De Bruyne but Pellegrini says more will be known after the 24-year-old undergoes scans on the affected area.

“The doctor thinks, but he cannot be sure, that it’s a problem in his medial ligament. We’ll see how it is but it’s impossible to know before tomorrow,” he said.

“I’m optimistic he won’t be out for the rest of the season. We’ll see how important the damage is. It’s not the cruciate ligament, it’s the medial we think.

“Kevin has been a very important player all season. He didn’t start this game as we have nine games between now and next month.

“It is difficult to know. He is with the doctor, it could be the medial ligament. Tomorrow we will have more news but it is not a nice injury.”