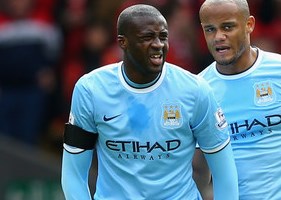 The Ivory Coast international was forced out of Sunday’s eventual 3-2 loss at Liverpool inside 20 minutes with a hamstring injury and although it is not yet known how serious the damage is, Pellegrini is eyeing a worst-case scenario.

“It’s difficult for Yaya to be in the next game. We will see tomorrow, I don’t know how serious he is injured,” he told Sky Sports.

“I think it will be difficult for him to finish playing this season.”

Toure has been an integral part of the City line-up this season having scored 18 goals and provided five assists meaning he will be sorely missed in the final six matches as the Eastlands outfit chase a second league title in three seasons.