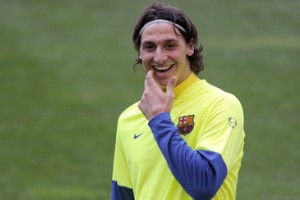 Manchester City are ready to intensify their interest for Barcelona striker Zlatan Ibrahimovic.

It is reported that Manchester City are set to step up their interest in Ibrahimovic after Barcelona signed David Villa.

Roberto Mancini is a big admirer of the lanky Swedish striker from their two title-winning season together at Inter Milan, and City have shown they are not afraid to go for Europe’s top names.

Barca do tend to sell in order to off-set such extreme outlay like Villa, as they did last summer, when they paid out £42m for Ibrahimovic, sending City target Samuel Eto’o the other way to make the deal worth £62m.