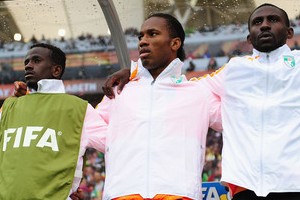 Interesting transfer news are out and it has been reported that Manchester City are set to offer £20million to clinch the services of Chelsea striker Didier Drogba.

Drogba’s agent, Thierno Seydi, has revealed that he has held talks with the Eastlands club and has hinted at a possible shift for the Ivory Coast star.

“Today he’s at Chelsea. Maybe there will be surprises before August 31,” Seydi said.

“I haven’t spoken to just anybody. The only contact I’ve had directly was with City.”

Seydi also indicated to Radio Monte Carlo that at Drogba’s age, 32, there was an element of financial security coming into play.

“At his age I can no longer hide the financial aspect. The club that want Didier will have to meet the price,” he added. Roberto di Matteo : Chelsea Can Challenge For The Title!