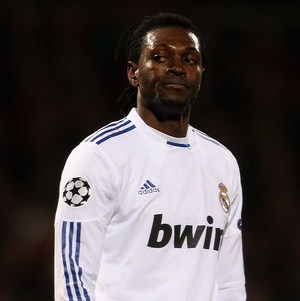 It is believed that Manchester City could use Emmanuel Adebayor as a bargaining chip in talks for Real Madrid star Kaka.

Premier League giants Chelsea and Manchester City have been put on red alert after it emerged that Real Madrid are ready to sell the Brazilian international superstar.

The former AC Milan star has failed to impress at the Bernabeu since arriving in a £58million deal from the Italian giants in 2009.

However, with Roberto Mancini’s side now on course for Champions League football next season, Kaka could be tempted to join them if offered the chance, says the Daily Mail.

Adebayor, currently on loan at Real from City, could be used as a makeweight in any deal.