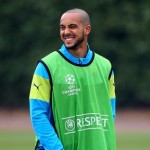 Reports are out claiming that Manchester City’s interest in Liverpool’s players does not end with Raheem Sterling.

The Mail on Sunday reported that the Reds recognise City could be in the market for Sterling and will do business at £50million and then offer Arsenal £25million for Theo Walcott.

However, City are also keen on Liverpool teammate Jordan Henderson.

But City will have to offload a big chunk of their existing ageing squad to conform to FFP regulations. Arsenal Confident Of Prising Cristophe Lollichon Away From Chelsea