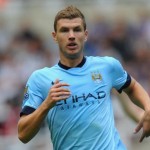 AS reports that the reigning Premier League champions are showing significant interest in the 22-year old Spaniard who has in his contract a buy-back clause with Real Madrid.

City are looking at a potential £32.9million swoop for Morata, who joined the Bianconeri from Real last summer, but will need to get rid of some players to fund the deal.

It is believed that Edin Dzeko and Stefan Jovetic are the attackers the Eastlands outfit is looking to sell in order to land Morata who netted in Spain’s 1-0 win over Ukraine in Euro2016 qualifying on Friday.