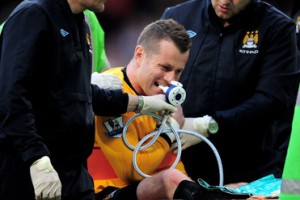 Interesting news are out and it has been reported that Premier League side Manchester City want to sign a new goalkeeper on emergency loan for the remainder of the season.

Local newspapers have reported that Manchester City were last night in talks with the Premier League about bringing in a goalkeeper on emergency loan after Shay Given’s season was ended by a dislocated shoulder near the end of the goalless draw at Arsenal.

Given will find out today if he needs an operation, in which case the Republic of Ireland star would face four months out.

In his absence, City must hope Stuart Taylor proves his fitness quickly this week as he returns to training for the first time since a knee clean-up operation.

Otherwise, City will need to persuade the Premier League to let them sign a keeper outside the transfer window.