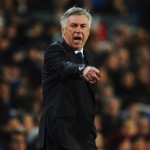 It has been reported that Manchester City are moving for Real Madrid coach Carlo Ancelotti.

Sky Italia claims that City chiefs have dropped plans of waiting for Pep Guardiola, whose Bayern Munich deal expires in 2016 and will now focus on bringing Ancelotti back to England this summer.

The former Chelsea manager has seen talks over a new contract at Real go cold since Christmas as his team have suffered a dramatic form collapse.

Ancelotti’s success in Europe, where he is a three-time Champions League winner, is attractive to City directors, particularly chairman Khaldoon al-Mubarak.

Current City boss Manuel Pellegrini is expected to be shown the door at season’s end. Jose Mourinho Under Consideration At Chelsea For Next Season