It has been reported that Brendan Rodgers believes that Liverpool has handed the Premier League title to Manchester City. 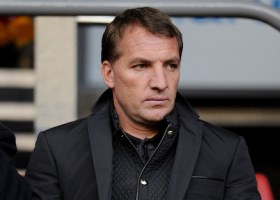 The Red imploded at Crystal Palace at Selhurst Park on Monday night, drawing 3-3 after leading by three goals just ten minutes into the second half.

The draw has Liverpool on top of the league table but they are just a point ahead of second-placed City who have two games in hand, compared to the Reds’ one, which has prompted Rodgers to suggest the title race is over.

“Yes, I think we needed to win tonight to keep the pressure on,” he told Sky Sports.

“Manchester City, they have got two home games now, two tough games, but we needed to win it. I think Manchester City will go on and win their two games and they will be champions.

“But for us it’s been an outstanding season up until now. For us to get 81 points, it’s a great achievement. We’re obviously disappointed now but we’ll go again.

“We have got a great game at Anfield now to finish the season and we’ll keep looking to build and develop what we’re doing.”