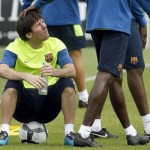 Cash rich Manchester City will have to come up with a staggering £225 million if they want to sign Argentinian international Lionel Messi.

The Barcelona star, arguably the world’s best player has just signed a new £170,000-a-week, seven-year contract at the Nou Camp and it includes a giant £225m release clause which all-but ends any chance of City signing the Argentine winger.

Even if City’s mega-rich owners agreed to pay the fee, they would then have to convince Messi to go to Eastlands and Barcelona manager Pep Guardiola has expressed his delight to wrapping up the deal.

The manager said that this is an immense piece of news for the club and for the player that Messi is renewing his contract with FC Barcelona. He also added that it is a privilege for Barcelona to have some of the best footballers in the world like Messi.

Messi’s previous release clause was £135m, which was on a par with fellow Barca stars Zlatan Ibramhimovic and Andres Iniesta.