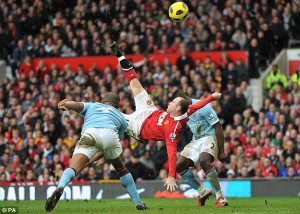 With 12 games remaining in the Premier League season, it is once more the Manchester teams that are in contention for the title. The hot favourites are United, who have a sizeable 12-point lead over cross-town rivals City. Sir Alex Ferguson’s men relinquished a points advantage at this stage last season, and as such will look to maintain their current excellent form to seal top spot. However, the meeting of the sides at Old Trafford on April 8th will give the Red Devils the perfect opportunity to wrap up the league title, if they have not done so already by that point.

United’s form has been nothing short of imperious over recent weeks and months; the Reds have claimed an excellent 38 points from a possible 42 over their last 14 games. With involvement still in the Champions League and FA Cup, United are looking for a momentous treble, with the league looking wrapped up. A potential banana skin in the form of Everton at home – a fixture that ended 4-4 last season – was successfully negotiated recently with a 2-0 victory for the hosts. The derby day coincides with the same weekend that Sir Alex’s horse, Harry the Viking, runs the Grand National, but the Scottish manager will be fully focused on winning the grudge match.

City on the other hand have suffered this season and failed to live up to the high expectations they set for themselves during their 2011-12 title win. Roberto Mancini’s men have floundered in Europe and been inconsistent in the league, with silly defensive errors frustrating the Italian trainer.

Compared to United’s impeccable form of late, City’s record is not so impressive. Two draws and a defeat in their last three Premier League games makes grim reading for the Etihad Stadium faithful, with QPR, Liverpool and Southampton all taking points off the champions.

At this stage in the season, City can not afford any more slip-ups if they stand any chance of retaining their crown. Even if they go on to win all 12 of their remaining games, if United maintain any semblance of their current form it will all be in vein. However, after doing a double over United last season, including a comprehensive 6-1 win at Old Trafford, Mancini will look to regain some pride one way or the other with a victory whenever the teams meet.

As it stands the title is United’s to lose, however leads at the top of the table have been thrown away in a end-of-season wobble before. City need to get their heads down and grind out victories, praying that the likes of Arsenal and Chelsea can take points from United. With the Reds continuation in the Champions League, Sir Alex’s squad may well be stretched, but City are looking dead and buried unless a miracle happens. One way or the other; the clash of the sides at Old Trafford is sure to be quite the battle.