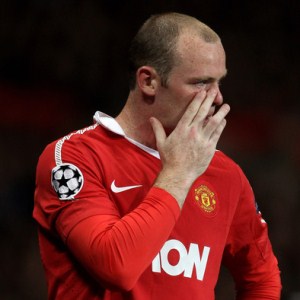 Sir Alex Ferguson’s Champions League gamble backfired badly as not even the returning Wayne Rooney could conjure up a Battle of Britain goal against Rangers.

In truth, it was less of a battle, more a stout rearguard action on Rangers’ behalf, which was fully deserving of a point at Old Trafford, if only for their strict adherence to Walter Smith’s limited game plan.

A bad night for United was made even worse by a serious injury to Antonio Valencia, who suffered a broken bone around the ankle that will doubtless rule him out for several months.

Let loose again after the maelstrom that has engulfed his private life, Rooney barely got a decent sight of the Rangers goal, let alone come close to finding it.