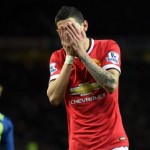 20′ – YOUNG SHOT – Fellaini brings down a high ball in the box, lays it off to Young as he strides into the box, and he slips, stretching for the ball and sending it over.

25′ – GOAL! Manchester United 0-1 Arsenal. Monreal scores – Ozil has space, finds Oxlade-Chamberlain on the right of the box. He stands up well to challenges, fights his way to pass inside the box for Monreal’s run into the box, and he clips a shot just inside the near post.

29′ – GOAL! Manchester United 1-1 Arsenal. Rooney scores – United attack down the right. The ball is worked to Di Maria on the wing. He come onto his left and whips in a great cross that Rooney dives towards to head past Szczesny.

30′ – PENALTY APPEAL – Ozil lifts the ball over the top for Welbeck, and he goes down under pressure. The referee gives nothing, but Welbeck is hacked off.

43′ – SZCZESNY SAVE – Valencia lifts a brilliant ball over the top for Di Maria who brings it down only to slam a shot from a tight angle straight at Szczesny.

61′ – DI MARIA SHOT – Young was booked for that challenge, by the way. Fellaini taps a ball into the path of Di Maria, who strikes a shot at goal just wide of goal from outside the box.

61′ – GOAL! Manchester United 1-2 Arsenal. Welbeck scores – A terrible back pass from Valencia is there for Welbeck to seize. He rounds De Gea and finishes into an empty net.

74′ – DE GEA SAVE – Giroud lifts a cross to Cazorla, and De Gea pulls off a great save to claw it away.

76′ – DI MARIA RED – Di Maria is booked for diving after being lightly, ever so lightly, brushed by Ramsey. Right, it’s actually a second yellow. He grabbed the ref to dispute the point, and got himself booked again within 20 seconds.

90+4′ – DE GEA SAVE – Ozil and Sanchez play a one-two into the box, and Sanchez takes the ball too wide, and his shot is deflected just wide of the post after a great De Gea save. ‘I Have Proved Everyone Wrong’ – Arsenal Midfielder Mathieu Flamini