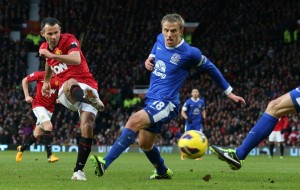 Ryan Giggs and Robin Van Persie scored the first-half goals that extended United’s advantage and gave the watching José Mourinho plenty to ponder ahead of their Champions League visit to Real Madrid on Wednesday. Everton’s weak display never offered Roberto Mancini encouragement of their recovery from two goals down to draw 4-4 last term.

City’s defeat at Southampton was not the cue for United to ease up against Everton with Madrid in mind. Quite the opposite. Everything about the league leaders’ approach was about getting the job done. From Ferguson’s team selection, which unsurprisingly proved the opposite of what he had claimed on Friday with only the likes of Michael Carrick, Rio Ferdinand and Ashley Young rested, to the home side’s frenetic start, the scars of last season’s slip were evident. Ferguson was not about to let another slip by the reigning champions escape unpunished.

Giggs made his United debut against Everton on 2 March 1991, a moment captured in the match-day programme with a photograph of the precocious winger standing in front of Dave Watson. Here, almost 22 years later, the remarkable 39-year-old picked a fitting opponent to score his first goal of the season and thus maintain his record of scoring for United for 23 consecutive seasons.