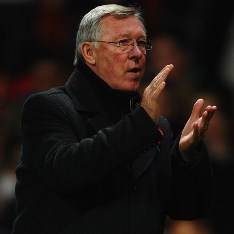 Manchester United made hard work of minnows Otelul Galati, but eventually emerged with three points to move to the top of Group C thanks to goals from Antonio Valencia and Wayne Rooney.

On their first appearance at Old Trafford since being thrashed 6-1 by Manchester City, Valencia’s eighth-minute tap-in and a late deflected effort from Rooney ensured United grabbed maximum points from their Champions League encounter.

It was hardly a commanding performance, but in rampaging right-back Phil Jones and Rooney – who netted his 27th Champions League goal from a starting position in central midfield – the home fans at least had a couple of happy memories to take away from a stadium where the ghosts in blue will linger for so long.

As the inclusion of Rio Ferdinand in place of suspended skipper Nemanja Vidic had been confirmed in advance by Ferguson, it was Rooney’s starting position in midfield that attracted most attention.