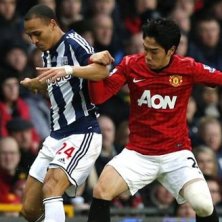 A ninth-minute own goal from Gareth McAuley set the hosts on their way, but having failed to extend that advantage when they had the better of play in the first half, they struggled in the second as the Baggies grew in confidence.

The visitors even hit the bar via a McAuley header with 20 minutes to play.

But Robin Van Persie, brought on as a second-half substitute, scored his 14th goal of the season in the last minute of the match to settle any nerves.

It was a moment of class on a difficult afternoon, and ensured that Sir Alex Ferguson will celebrate his 71st birthday on New Year’s Eve with his side seven points clear of crosstown rivals Manchester City in the title race.