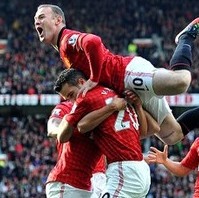 Former Arsenal striker Robin van Persie opened the scoring for the hosts in the 2nd minute thanks to some slack defending by the visitors.

At the stroke of halftime United wasn awarded a penalty after Santi Cazorla handled the ball in the box but Wayne Rooney missed the penalty.

United doubled their lead in the second half through left-back Patrice Evra who connected with a powerful header from a Wayne Rooney cross.

Jack Wilshere was showed the red card and Arsenal scored a consolation goal in stoppage time through Santi Cazorla. Check it out.