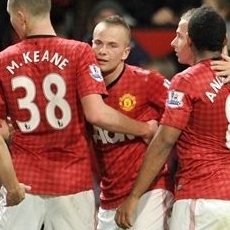 Tom Cleverley scored his first Manchester United goal as the Red Devils edged out Newcastle to secure a place in the Capital One Cup fourth round.

With Wayne Rooney making a successful comeback from his gashed thigh and Darren Fletcher completing the full 90 minutes on his first start since it was revealed he was suffering from a chronic bowel complaint 10 months ago, it was a satisfactory evening for Sir Alex Ferguson’s men.

Papiss Cisse did give the hosts a scare when he followed up his first goal of the season by crashing a late overhead kick against the bar.

Anderson had put Ferguson’s side in front just before the break, and United’s youthful defence held on to seal a last-16 berth.

Despite recording five successive victories since that disappointing defeat at Everton in their opening game, there still seems to be an obvious deficiency in the red ranks.