Manchester United captain Wayne Rooney rewarded the faith placed in him by his manager after scoring in a 3-1 win over Liverpool in the final of the International Champions Cup in Miami. 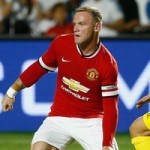 Rooney’s opposite number Steven Gerrard, never one to go missing against Liverpool’s arch rivals, typically led his team by example, coolly sending David De Gea the wrong way from the spot to open the scoring on 14 minutes after Phil Jones had clumsily and recklessly sent the dangerous Raheem Sterling sprawling in the penalty area.

But Rooney responded 10 minutes after the break, cleverly sidefooting on the volley a deep Javier Hernandez cross back past Simon Mignolet in the Liverpool goal.

The match was then turned on its head when Juan Mata made it two in as many minutes, the Spaniard’s effort from the edge of the box taking a deflection off Mamadou Sakho to leave Mignolet rooted to the spot.

Jesse Lingard, one of many to enter the fray in the second half, sealed victory in the 88th minute, controlling Ashley Young’s centre before firing into the back of the net and ensuring Van Gaal picked up his first piece of silverware at the first time of asking as United manager.