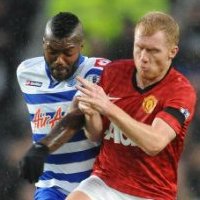 The Premier League’s bottom side led through Jamie Mackie’s well-deserved 52nd-minute strike but United woke up with a flurry of goals.

It was the sixth time in 13 Premier League games that Manchester United have won after going behind.

Despite their ninth defeat of the season, Redknapp will be largely encouraged by the QPR performance. They remain only five points from safety, and possess more than enough quality in their squad to reach 17th place or better.

Javier Hernandez : Champions League Is Next!