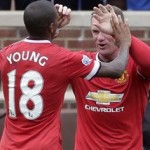 After the best part of a season under David Moyes, watching Manchester United play anywhere near competently still feels alien.

With the caveat that this was a friendly, United went beyond mere competence in the first half, and played with verve not seen in a United team for some time.

United went ahead after Darren Fletcher played a backheeled one-two with Wayne Rooney, passed inside for Danny Welbeck, who spread the ball left for Ashley Young, in space, who drilled in at the near post.

Michael Keane dragged Gareth Bale to the ground in the box, who converted the penalty easily. United regained the lead when Young, playing with a desperation that suggests he realises he could be on borrowed time under Louis van Gaal, sent in a cross for Rooney that sneaked into the goal.

In the second half, Gareth Bale almost equalised with a free-kick that hit the post. Despite a succession of United substitutions, they remained in control.

Cristiano Ronaldo was introduced in the 74th minute, but Real struggled to create any further chances. With 10 minutes to go, Javier Hernandez smartly headed past Iker Casillas to cap a comfortable win for a newly confident United side.