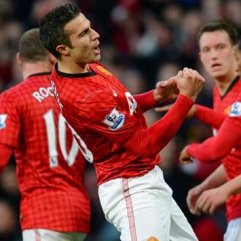 Manchester United retained their six-point lead at the top of the Premier League courtesy of a 3-1 win over Sunderland at Old Trafford.

Sir Alex Ferguson’s side ensured they will top the table at Christmas thanks to a dominant first-half performance that saw both Robin van Persie and Tom Cleverley score excellent goals.

Wayne Rooney added a third after the break following another flowing move in what was a stylish performance from the home side, though United were typically vulnerable in the second half and conceded when Fraizer Campbell headed in against his former side after 72 minutes.

Still, the sight of Nemanja Vidic coming off the bench after 68 minutes to make his first appearance since September should herald a cure to United’s residual defensive ills heading towards the New Year.