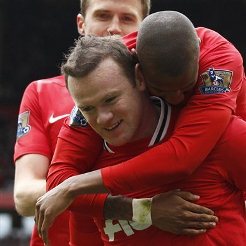 Wayne Rooney scored twice as Manchester United bounced back from defeat with a 4-0 win over Aston Villa at Old Trafford, restoring their five-point lead atop the Premier League.

Rooney – who had a mediocre game by his standards – struck a deflected third with Nani adding an injury-time fourth as United saw Villa off with ease in the end.

The result puts Sir Alex Ferguson’s defending champions on 82 points with four matches remaining, their next encounter a derby with second-placed Manchester City at Eastlands.

Alex McLeish’s side lie on 35 points, six clear of the drop zone with five games to play.