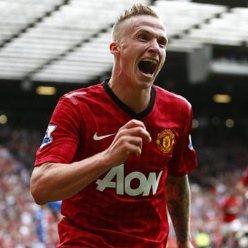 A missed spot kick from Javier Hernandez in the fifth minute after a very dubious penalty was awarded left the match goalless at half-time, but goals from Paul Scholes, Hernandez, debutant Alexander Buttner and Nick Powell gave United all three points.

It was a landmark day for three United players: Scholes made his 700th appearance for United, Ryan Giggs became the first player to feature in 600 Premier League games, and Rio Ferdinand hit the 400 mark, and it would prove to be a fine afternoon for all three after an unconvincing first-half showing from the hosts.