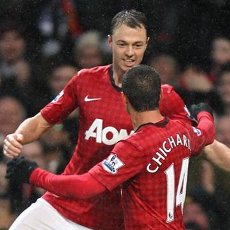 The Premier League leaders twice came from behind in a match of controversy and thrilling excitement.

James Perch gave Newcastle an early lead before Jonny Evans scored first at the right end, then the wrong one amid uproar over an offside that was withdrawn by ref Mike Dean.

Patrice Evra restored parity just before the hour only for Papiss Cisse to put Newcastle in front again.

Robin van Persie quickly equalised and Manchester United missed a host of chances before Hernandez finally netted the winner in the final minute of normal time.