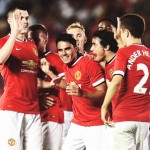 Manchester United’s new era under Louis van Gaal got off to a winning start, with United comprehensively beating LA Galaxy 7-0 at the Pasadena Rose Bowl on Wednesday night.

Danny Welbeck opened the scoring to give Red Devils the lead on 13 minutes, before a Wayne Rooney double had them cruising by the break.

Van Gaal made a host of changes at half-time, with Darren Fletcher and new signing Ander Herrera the only players to play more than 45 minutes. Two of those subs — Ashley Young and defender Reece James — joined in on the goal scoring action once play resumed, each bagging a brace.