It has been revealed that Everton hero Kevin Kilbane has urged Manchester United captain Wayne Rooney to return to Goodison Park.

Kilbane says it’s time for the United skipper to head back to his former stomping ground. 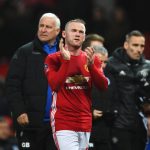 “I think it will be a good move but his agent said that he has got offers from around the world,” he said.

“To go to Everton might be a good move for him because the way he left Everton didn’t quite work well for him from a personal point of view.”

Rooney is due back for United preseason next week.