Interesting transfer news are out claiming that Manchester United have Barcelona midfielder Alex Song on their shopping list. 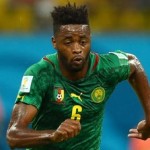 The Daily Star reported that United have earmarked Song as the man they want to sign if their move for Juventus midfielder Arturo Vidal ends in failure.

Old Trafford chiefs are hoping to schedule fitness tests for Vidal before paying a fee, to make sure they aren’t inheriting a problem that could affect the player in seasons to come.

Van Gaal is understood to have selected Song as a potential alternative, with the former Premier League star keen to play under the Dutchman at Old Trafford.

The Cameroon international left Arsenal for £15m in 2012 but has failed to cement a starting place in his two years at the Nou Camp.