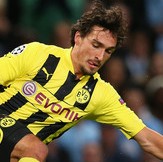 Reports are out claiming that Manchester United are interested in signing Borussia Dortmund defender Mats Hummels.

The Mirror revealed that Sir Alex Ferguson sent his brother and chief scout, ­Martin, to watch the 23 year old in action for their country in the Germany’s goalless draw with Holland in Amsterdam on Wednesday.

The central defender signed a new five-year deal in the summer, but insisted on certain get-out clauses and harbours an ambition to play in the Premier League.