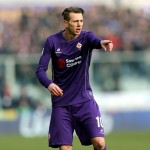 It has been reported that Manchester United have launched a bid for Fiorentina midfielder Federico Bernardeschi.

Gazzetta World reported that the Red Devils have offered Fiorentina £22m for Bernardeschi – a player Sir Alex Ferguson recommended during his tenure.

Bernardeschi, 22, is considered one of Italy’s hottest prospects and has a host of European admirers with Chelsea, Bayern Munich and Barcelona all in pursuit.

The youngster will start for the Viola tonight against Europa League opponents Tottenham.