Reports are out claiming that Manchester United are close to striking terms with David De Gea over a new contract. 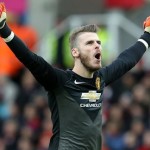 The Spanish international’s current deal has less than 18 months to run and he is being linked with Real Madrid.

The Sun says United are close to thrashing out a five-year deal worth around £140,000-a-week for De Gea.

The 24-year-old’s agent Jorge Mendes revealed yesterday he was in talks with United. Bastian Schweinsteiger Loves Being In Control At Man Utd