It has been revealed that Manchester United are in talks for Ajax teen Daishawn Redan. 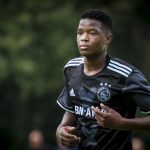 The Sun reported that United’s academy is starting to gain a real Dutch flavour as they raid Holland again to sign Redan.

Timothy Fosu-Mensah has already made nine first team appearances since moving from Ajax in 2014, and he was joined this summer by exciting young star Tahith Chong, from Feyenoord.

If Redan does turn into a top player, United could have former boss Louis Van Gaal to thank, as the former Ajax manager brought scout Henny De Regt to Old Trafford from Amsterdam in February.

De Regt is believed to have tipped off United about the top talents at his former club and been instrumental in the signing of Redan.

The 15-year-old striker has a prolific record in the Ajax academy and represents Holland a year above his age group at under-17 level.