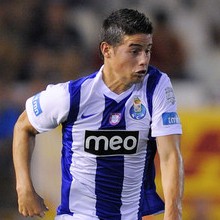 Reports are out claiming that Manchester United are intensifying their pursuit of Porto star James Rodriguez.

Record revealed that United manager Sir Alex Ferguson is increasingly convinced about the former Banfield man’s suitability for a switch to Old Trafford.

And with speculation continuing to mount over the future of current United star Nani, Ferguson could look to test Porto’s resolve with a January bid for Rodriguez.