Reports are out claiming that Manchester United have completed the £25m signing of Dutch international Memphis Depay from PSV Eindhoven on a four year deal. 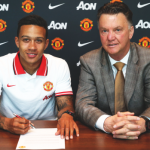 Speaking to the club’s official website, the 21 year old said: “This is a dream come true for me; to play for the biggest club in the world and also to have the chance to work with someone who I believe is the best manager in the world, Louis van Gaal. I have great belief in my ability and I work hard to strive to achieve my dreams.

“I have been at PSV Eindhoven since I was 12 years old and I would like to thank them for everything. It was a great moment when we won the league and I was so happy to be part of that. This is now a new chapter in my life and one that I am looking forward to.”

Boss Van Gaal added: “I know Memphis well from our time working together in the Netherlands national team. He is a young versatile player who has the ability to play in a number of different positions.

“It will take time for Memphis to get used to the rhythm of the Premier League but I have no doubt that he has the potential to become a great footballer for this club and he is at the right club to continue the good work he has done so far.”