It has been reported that Manchester United and England defender Phil Jones has dismissed Paul Scholes’s criticism of his centre-back performances, but admits he must become more consistent. 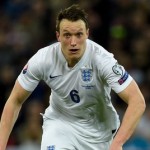 Jones played at right-back ahead of Nathaniel Clyne as England laboured to a goalless draw against the Republic of Ireland in Dublin on Sunday.

Scholes claimed on ITV yesterday that he was better suited to a role on the flank because he “tends to get dragged out of position quite easily”.

Scholes added: “At right-back you still need to be clever positionally but I think he can use his pace and power and he hasn’t got a bad delivery either. I just think at centre-half he is not quite clever enough to do it.”

However, the 23 year old responded : “People comment all the time about individuals.

“Gone are the days when I used to take notice of what people say and react to it. It doesn’t bother me one little bit anymore.

“I am at the stage now where I can’t be considered as a young player anymore. I have got to step up, keep playing well and do what I do best.”

He added: “I was no [Andrea] Pirlo or something like that, do you know what I mean? I could have told you that before the game!

“I can laugh about it now but I try and do the job as best I can. I know I’m not an out-and-out midfielder who is going to get on the ball and start spraying it about. I know what I am good at and I try and stick to that.

“I have played in all three [positions] now and sometimes it can be difficult going from one position to the next but I feel more comfortable at right-back.

“Obviously centre-back is where I want to be playing but I was happy to play at right-back [against Ireland]. You just take it on the chin and play where you are asked to play.

“I know I can play in those positions. Some people think it is easy to just slot in there and everyone assumes that you have got to be up to speed straight away. But I was happy to play and it was a tough game.”