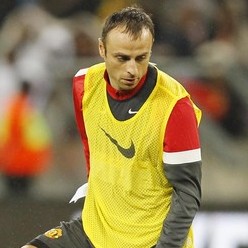 It has been revealed that Manchester United are determined to find a buyer for Dimitar Berbatov.

The Mail on Sunday claim that United want £8million for the Bulgaria striker, who cost £30.75m from Tottenham in 2008 and was the Premier League’s joint leading scorer when they won the league title two seasons ago.

But with only lukewarm interest from Russian clubs including CSKA Moscow, United are willing to negotiate and may even be forced to send Berbatov out on loan.