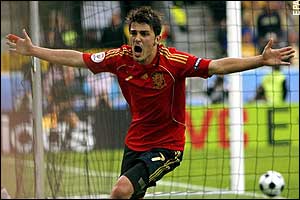 Sensational news are out and it has been reported that English Premier League champions Manchester United are ready to make a fresh move for Valencia strike-ace David Villa.

Local British newspapers have reported that the 27-year-old Spanish international steriker is back at the top of the club’s wish list, with Sir Alex Ferguson determined to get his man.

United thought they might land Spain’s star of Euro 2008 last May by matching Valencia’s asking price, only for Villa to stall as he hoped to join either Real Madrid or Barcelona.

But now, with the Spanish clubs investing heavily in other strikers, United hopes that Villa could be persuaded to join them next summer.

It is believed that Manchester United officials have made contact with Valencia through an intermediary, and want to agree a deal ahead of the World Cup to avoid an auction.