Reports are out claiming that Manchester United boss Louis van Gaal is confident they can land Real Madrid star Gareth Bale this week. 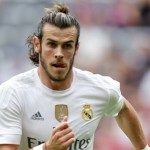 The People reported that Van Gaal will have the Bale boo-boys of the Bernabeu to thank if he does land the £95million Welsh wizard.

Should the Madrid fans turn on Bale again in their first La Liga home match of the season next Saturday, Van Gaal will have three days before the transfer deadline on the Tuesday evening to do a deal for the world’s most expensive footballer.

Wales international Bale was hounded by Madrid fans on and off the pitch last season. Any more negativity towards the 26-year-old may lead the club’s powerful president Florentino Perez to re-think his stance on the former Tottenham star’s future.

If they fail to make a headline signing by the time the window shuts in just over a week’s time, United officials have hinted they will go back in for Bale in January – especially if Madrid fans continue to give him a hard time.